The questions were just too big. So I started to lie to her.

I started my day normally. I got the family’s breakfast. I got ready to go to school. I put my headscarf on, got my phone and my bag. When I got to the top of the hill, I saw the military vehicles and realized that they had closed off the area. I couldn’t go to school because of the barriers. When I saw the bulldozers, I ran back to the house. I wasn’t aware of time passing. It was as though time stood still. I imagined seeing our house demolished, seeing the rooms fall in. Then my three-year-old daughter, Sadin, started asking questions: “Why are the army here? Why do they have to destroy those houses? Why do those people have to move?” I couldn’t answer her. The questions were just too big. So I started to lie to her. I told her the army had made a mistake. I told her, “They don’t hate us, they’re just pretending.” I don’t know whether Sadin believed me, but at least she calmed down. One of the other children in the village was so traumatised that he didn’t speak for days after the bulldozers came, so I think that I was probably right to try to protect Sadin.

When the army came to demolish the homes of my neighbors I couldn’t watch. All I could do was cry. And at that specific moment, I hated. I hated everyone there. The soldiers, the civil administration, the bulldozer drivers… I wanted them not to exist.

I don’t want to be relocated, I am afraid. This threat from the Israeli government and the civil administration to move us to other places is very dangerous. I’m also afraid of the Palestinian community. If we find ourselves annexed onto an existing Palestinian village or town, we will pay dearly for it. The people there will have jobs, but we will have nothing. Bedouin are farming people, and if you move us, we lose our land, our animals and our grazing areas. We will lose everything and be thrown into a place where nothing belongs to us. We are already poor, but this will make our suffering much worse than before. It will be catastrophic for the community. I don’t even want to think about it. I want to stay here.

My husband, Eid, is an artist and a lot of his works are replicas of the machinery of occupation. It is not easy for me to see those replicas. He is always saying that it is important to distinguish between the man and the machine. He says that he wants to use his art to make people see that we have to hold people to account, not machines. He says that it’s important to realize that machines can be used for good, that they can build as well as destroy. I wish I could see things this way, but I can’t. To me, the bulldozers look like scorpions – they are yellow and they have a giant arm which is made to hurt and destroy. If my husband builds another bulldozer I may just break it.

Na’ama Hathelin is a school teacher from the Bedouin community in Umm al-Kheir in the occupied West Bank. She is married to the artist Eid Hathelin, with whom she has three children, Sadin, Lin and Jury. Na’ama witnessed the demolition of two of the houses in her village. Since then there have been many more demolitions in Umm al-Khair. This interview was conducted on 8th September 2011.

Umm al-Khair is a Bedouin Palestinian village on the eastern slopes of South Mount Hebron, 20km south of Hebron. A census held by the Palestinian Authority in 2007 showed that the village had 516 residents. Two thirds of the village residents are refugees, descendants of Bedouin families that were expelled by Israel after the 1948-1949 war from the area of Tel Arad to the West Bank, which was under Jordanian rule at the time. The two largest hamulas (extended family groups/clans) of these compose the population of the village Umm al-Khair: al-Hadhaleen and al-Faqir.

In 1981, the Jewish settlement Carmel was established to the west of Umm al-Khair. The establishment of the settlement caused great harm to two of the families living in Umm al-Khair. These are two extended families who live a few meters from the Jewish settlement: refugee families that are part of the the Hadhaleen hamula. They were deported, with others, from Tel Arad and arrived in Umm al-Khair in the early 1950s. They settled on a piece of land that they bought from residents of Yatta. One family is concentrated in the area right beside where the northern neighborhood of Carmel settlement was built. The second family lives in the area where the southern neighborhoods of the settlement were built. In the second generation of these two groups there are five households – two in the northern part and three in the southern part. As of 2016, there are 20 households in the third generation of these families – eight living in the northern part and twelve in the southern part, and these make up more than 100 people.

As a result of their proximity to the Jewish settlement Carmel, the Civil Administration of the Israeli occupation army prevents these families from building homes. In addition, it systematically works on destroying all the residential buildings that were constructed after the establishment of the nearby Jewish settlement. In the past decade, these populations have witnessed house demolitions on a large scale in 2007, 2008, 2012, 2014 and 2016. 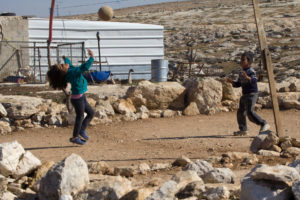 Beauty is made from pain, great beauty from greater pain, a photoessay by Margaret Olin and David Shulman a day in south... Read more  » 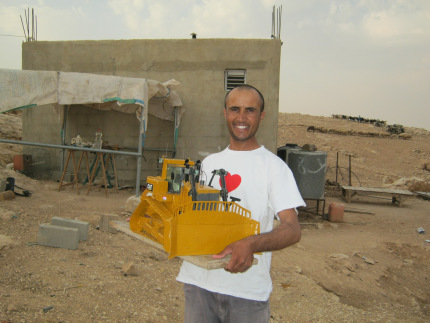 The Caterpillar D11 is a heavy-duty bulldozer used in mining, building roads and splitting rocks. It is one of the biggest bulldozers... Read more  » 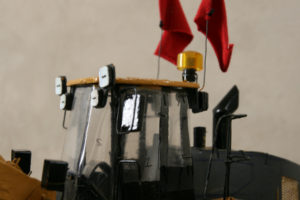 The tractor was built during the Muslim month of Ramadan when the heat, hunger, and thirst make it impossible to... Read more  »
Demolition in Umm al-Khair, 24.08.2016

Eid is a Palestinian Bedouin living under Israeli occupation. Ever since he can remember, Eid has picked up scrap materials and turned them into art. By following Eid’s creative process, this film celebrates the optimism and integrity which enables him to transform the machinery of occupation into an artistic expression of individuality and hope.

The Christian Peacemaker team interview residents of Umm al-Khair after the Israeli authorities demolish houses and an oven in the village.

The testimony of Eid Suleiman Adlin

The testimony of Eid Suleiman Adlin, 27 years old, married and father to a baby girl, a Bedouin Palestinian from Jahalin tribe and resident of the village Umm al-Kheir (near the settlement of Carmel). This film was made in 2011.

Umm al-Khair is a small Bedouin village of less than 100 inhabitants located in the South Hebron hills. The sun rises in the mountains of Jordan around 5.30am and its inhabitants begin the hard task of living in the middle of the desert hills .

Some aerial photos of the settlement of Carmel and the village of Umm al-Khair.