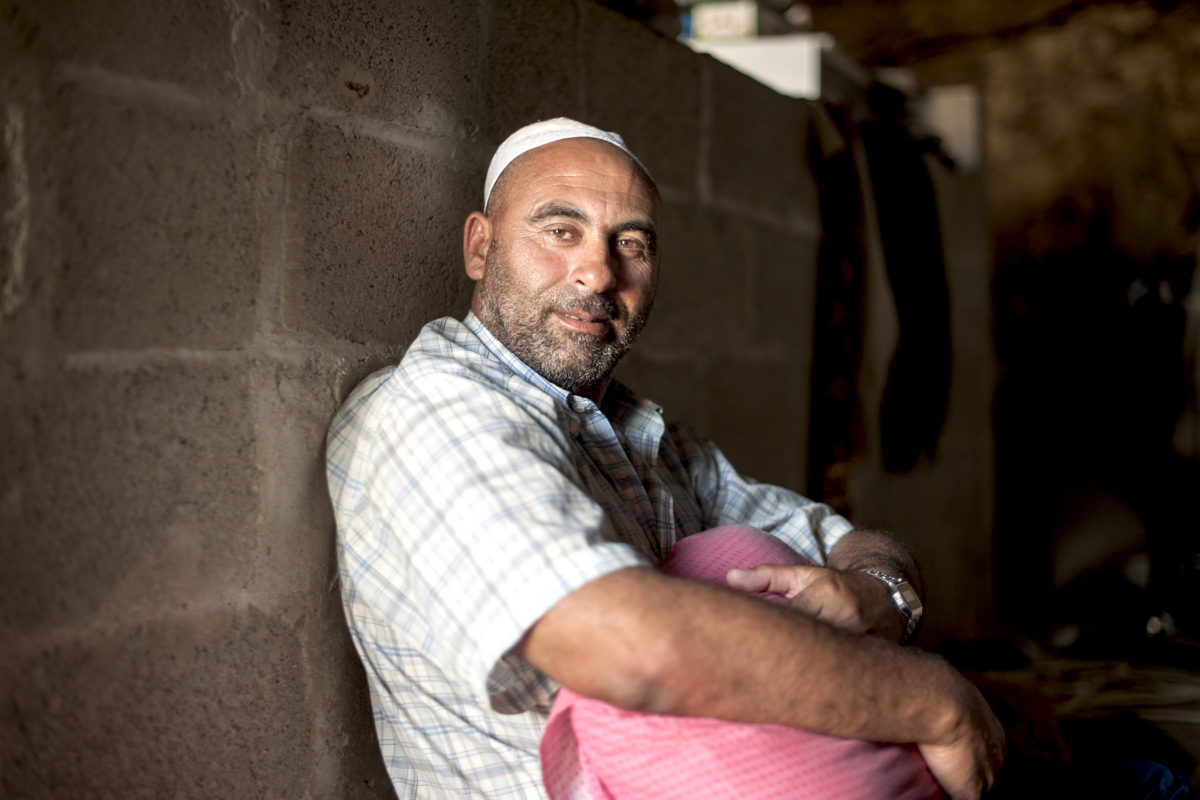 Interview with Omar from the village of Tuba. For the original interview in Arabic go here (2016)

My name is Omar Muhammad Ahmad Jundiyeh. I am 48 years old. I was born in Khirbet Twaneh, right here. The village has people who were expelled in 1948. My father bought a piece of land here during the Jordanian rule, so he came here and dug this cave and the other one. In 1979 we moved here. My mother was generous and loved hosting and honouring people. Everyone loved her. She passed away 29 years ago, in 1987. She had 10 children and I was the youngest one so I was precious to her, she loved me a lot. My father passed away in 2000, 16 years ago. Until recently we had no electricity here, it was strange for us to move from lamp oil to electricity. Some people thought it would be impossible to have electricity in this area. Women used to sit the whole day to prepare cheese, but now it barely takes an hour with electricity. Women used to work all day long if there was a lot of milk. Thank God, there is electricity now and women make cheese and do the washing very easily.

Those settlements you can see were built in 1982. Before that, there were no settlements and no Jews here. When the settlements were established, the trouble started. In the past we didn’t worry about our sheep, but since the settlers came, the shepherds are scared, school children are scared, people are scared in their own homes. The conditions here have become very difficult.

Everyone here lives from their sheep. Everyone lives from farming the land and grazing their herds, it’s a very simple source of income that families here depend on. In 1997 they demolished our village. They didn’t leave one stone in place except for this cave that we’re in now. There was grain here so they left it standing. They demolished everything and still we stayed. We rebuilt the village all over again. We had a lawyer who got us an interim order, but in 2000, they came back and gave us demolition orders.

The army was coming every day for four days and telling us to leave. Eventually their commander said that if we don’t leave he’s going to blow up all of our houses. That if we protest, they’ll destroy everything but if we leave, we might be able to come back with the help of a lawyer.

The villages downhill appointed Shlomo Lecker as their lawyer and we had Neta Amer. We stayed in Twaneh for four months and when the court ruled, we returned.

The Intifada started in 2000 that’s when our problem with the road began. Before the settlers came, this was the main road for all the villages and there was no alternative to it. To avoid it, we had to travel 15 km through the countryside. The kids used to run into settlers who would chase them and scare and beat them.

They also used to watch over the road and arrest us if we go onto it. They threatened us with a 2000 shekel fine if they caught us there again. So the conditions here became very difficult. For two years, our children had to walk for almost 10km to get to school. When the foreign activists and Taayush came, they understood how difficult it was for the children and they started walking them to school. Even when the children were accompanied by activists, there were times that they would get beaten by settlers. The activists made a big  fuss about it and the army decided to also accompany the children with an army jeep. This has been the situation since 2004. In the past there were problems between the children and the settlers and the army on a daily basis. The soldiers used to also be beaten by the settlers.

Life would be much better without the occupation or the settlers and people would just be living their lives. We would be worrying only about our families and our sheep. We wouldn’t care about politics or anything. In the past, there were no phones and when people left we used to worry about when they’d come back. That was the only worry we had.

I love this place. Every time I leave it my body hurts. I’m used to living here, and I cannot leave. How can I leave a place that I love so much?