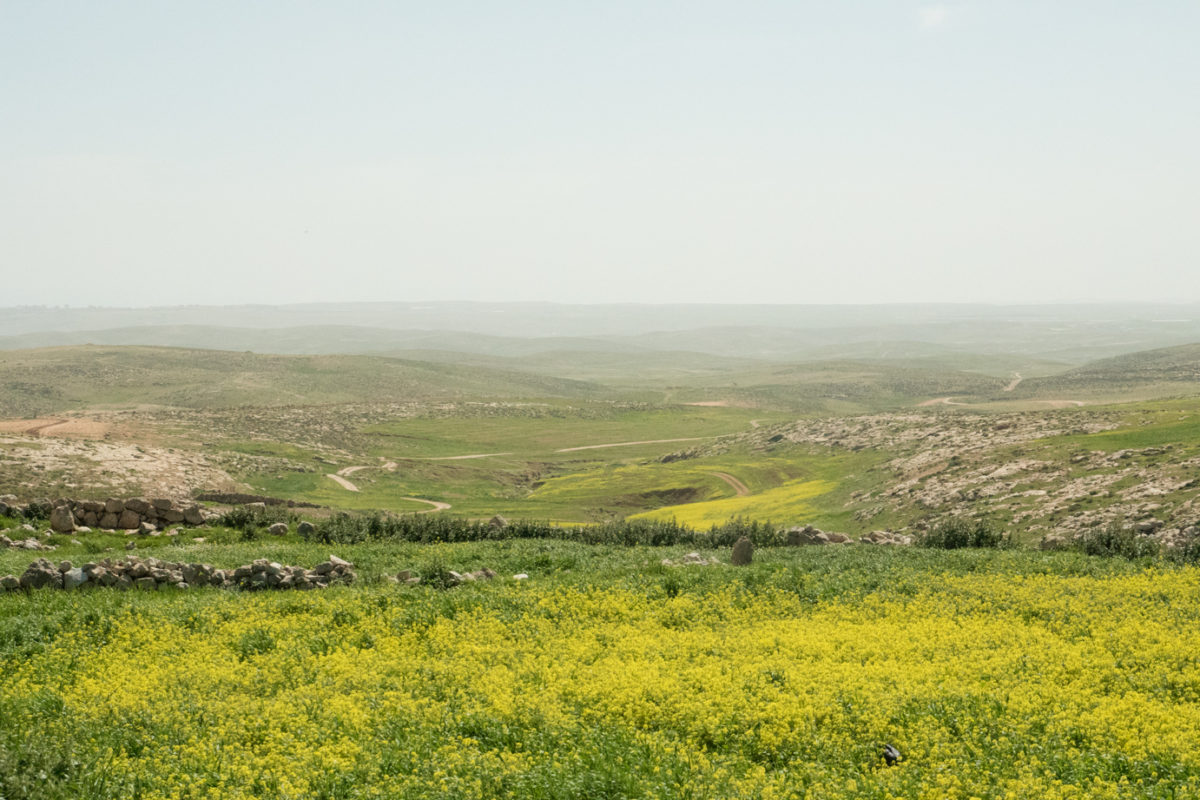 Jinba the Magical - Interview with A.O

A.O, a young mother of three from the village of Jinba in the 918 Firing Zone, describes life in the South Hebron Hills. A.O speaks of her personal relationships in Jinba and invites the listener to her world of vivid colors and sounds, a world where the rocks may tell you a story about a man called Abu Ali, and where wisdom passes from mother to daughter (2016).

My name is A.O. I was born in a cave in Bir il-Ed in 1988. After that the Israeli soldiers expelled us from Bir il-Ed and we came to live here in Jinba. Now I live in Jinba. I got married eight years ago and I have one daughter in the 2nd grade and two sons.

I want to tell you about life here in Jinba. People here live a very simple life, they are shepherds and they care about their sheep, they take their sheep to graze in their land. That’s the men’s lives.

As for the women, as you see, we work to clean under the sheep, to clean our homes, to take care of our children and raise them. When I finish my work, especially in spring, I like to look at the mountains and the sun. In Spring the weather here is very nice and I enjoy watching the green land and looking at the birds, it’s very nice. In a place like this, there aren’t many people and there are hardly any cars, so it’s a very special place to live and relax in, you can live however you want.

We live in plastic tents because the Israelis do not allow us to build normal houses, so in winter you hear the voice of rain and I’ve enjoyed that sound ever since I lived in a tent. In spring I enjoy the green land and in the summer I enjoy the golden land. It’s like magic. Jinba is magical. All the lands of Palestine are magical.

Both of my grandfathers were born here and so were their fathers and grandfathers. They all were born here and they died here. My grandfather’s father’s name was Hussein Mahmoud Jibreem, Abu Khaled, he passed away when he was 90. My grandfather is Abu Ali and a lot of people from Europe and the USA came here only to see him because if you wanted to know anything about Jinba or Mirkez and other vllages here, you could just ask him. After he passed away, a lot of people were sad because it was such a great loss.

One day a Bedouin man came to see Abu Ali, thinking he was still alive and didn’t know he was dead. He asked about him and he was told that he passed away and he cried. You can ask a lot of people about my grandfather, everyone was sad when he died, he was a very special man, a very kind man. He did not care about the occupation, he said he wants to live and die here, and so he did. He loved his sheep, and he loved caves. If you want to know about Abu Ali, go the caves, go to the mountains, look at the sheep, look at the houses and tents, ask the rocks about Abu Ali and they will tell you about him.

The most important person in my life is my mother. I love her so much and she means so much to me because she taught me to be patient and strong, she taught me how to live among people because one needs to know people in order to be able to live among them. Many times, when I lose myself I look to my mother.

(This account is based on an interviews with A.O from the village of Jinba, conducted in March 2016. )